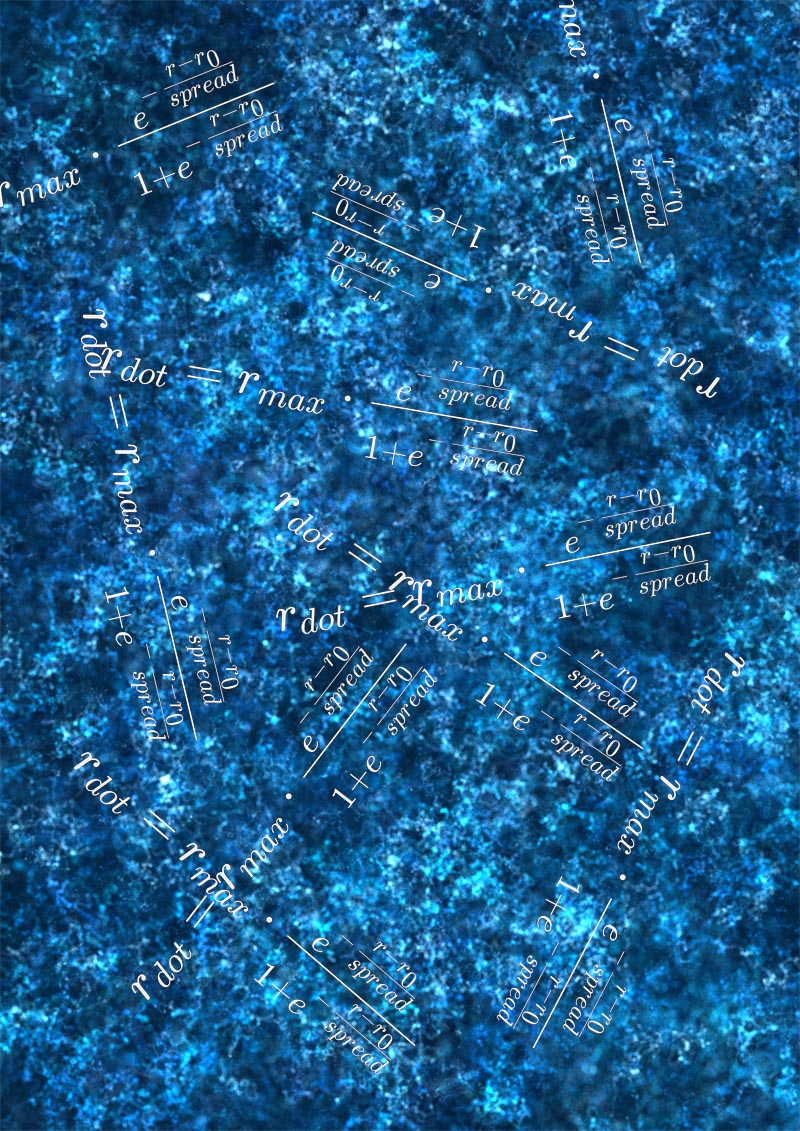 For my last painting Fun in Djerba, I needed a background with water

Making Fun in Djerba had me experiment a few techniques though, that I thought might be interesting to share.

During my recent collaboration, Portraits n°1 with physicist Ludovic Bellon (read full article here), I came up with a way to energize particles into a Brownian motion. As I don’t exactly follow the strict theoretical rules by considering that my particles can have an acceleration, I was free to define my own version of a noisy force that ends up moving particles in random directions.

With this pseudo-Brownian equation that has a random amplitude and direction, the overall result can be quite organic, once you add a blurring layer. Here below is a photoshopped image that shows the raw version of a pseudo-brownian particle background, and a transition to a blurred effect. Surprisingly simple though!

The truth is for this image above I tied a new particle to our moving pseudo-Brownian attractor with a spring force, what we see is the trajectories of such particles, hence the seemingly smooth and circular overall motion.

Based on those findings, I kept exploring.

Even after adding more particles, with different sizes and colors, I could not quite converge on anything satisfactory. Dang.

Taking a break on the balcony, looking a the water surface of the vibrant blue swimming pool without really paying attention…

Bam!
Modes.
There is a spatial pattern in those wavelets, a characteristic dimension. It’s not a mess, like a white noise, there is some inner order.

So I tried to apply a random mode between 1 and 10 to each particle, and based on their mode I acted on their drawn properties:

This means tiny dots are drawn with a sharp opaque brush – relatively opaque, we’re talking 5% maximum because we use many particles – and bigger dots are more blurry.

The equation above (code language ES6) is just a decreasing linear function where A is the alpha channel in HSLA color space – a variable for opacity/transparency – and m stands for mode.

You instantly get a feeling of depth, like the focus of a camera. At first it felt like the closest particles were rain droplets painted on a window with heavier rain in the background!

This was because between mode 1 and mode 2 the radius was doubled (I had other values of a1 and a2 than those written in the previous code), and only a few particles had mode 1, so the ‘mode 1 layer’ was overly predominant.

By changing the law to something still linear but less violent in terms of scale, it looked nicer.

Also, I arranged that 50% of all particles have mode 1.

Last but not least, in my previous definition of the pseudo-Brownian noise, I chose a random module for the acceleration vector.

This means all the values between 0 and the maximum can be set. Removing the random factor cleared all the background from small-scale displacements of bigger particles. As a consequence, nice organic patterns emerged after only a few computational steps!

To the final artwork

The hole is made of dots with radially decreasing sizes.
To get control over the hole dimension and its sharpness, I used the very handy following function for transitions:

With the final water background and hole, I could piece the final piece.

Despite this article being a bit less detailed than my previous article on a creative process that led me to Djerba Sunset Phoenix, I have explained how I came to play with pseudo-Brownian modes with a goal: painting water with particles.

This was a first adventure with water and there is much room for improvement. With this new recipe for organic patterns with particles, I have been able to work on richer background gradients, or re-draw pictures with force field information and particles Browian-wandering around.

Alright folks thanks a lot for reading!