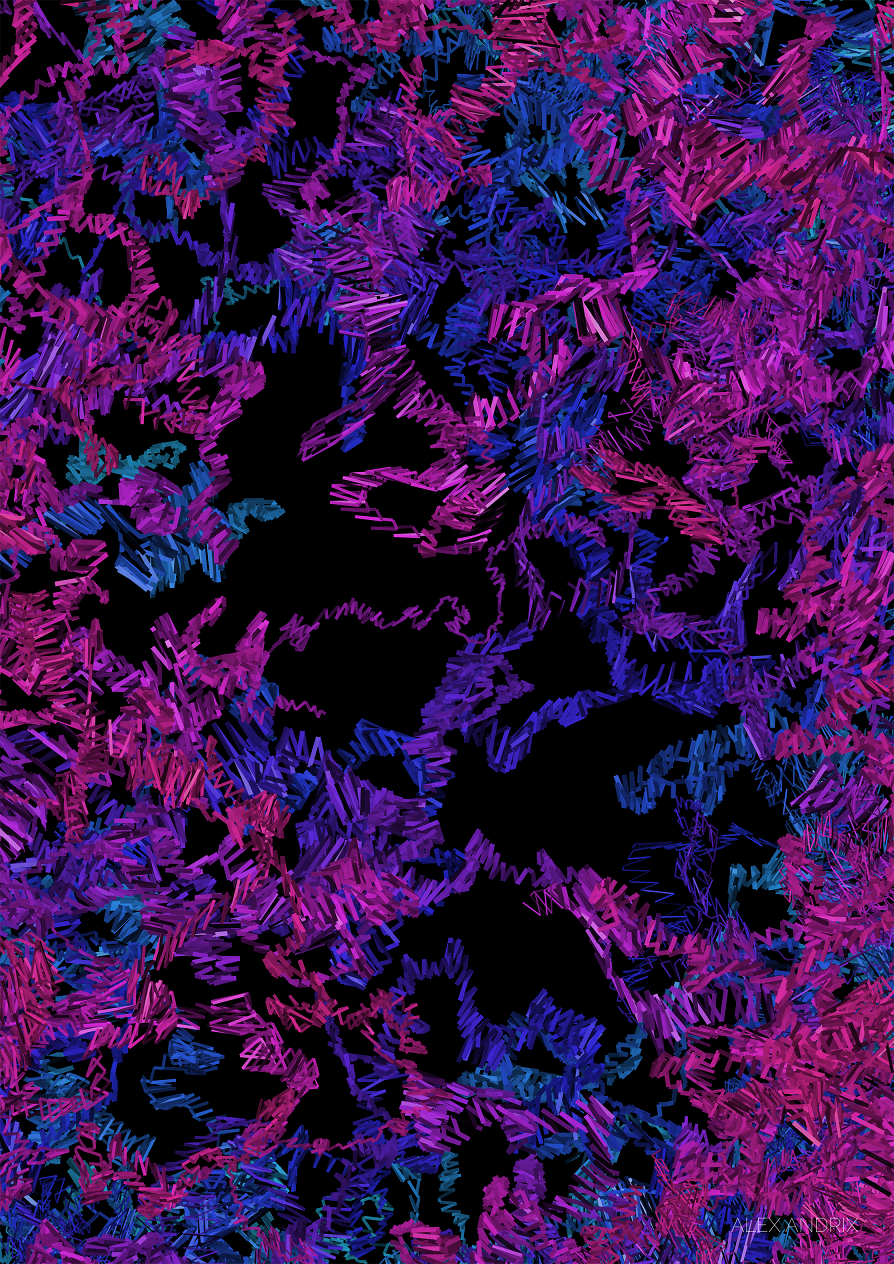 Portraits is a format of collaboration where I immerse myself in the world and the work of a scientist to create a painting.

Attempting to grasp as much as I can of the theories behind the experiments, I like to go down to reading books and publications in the field, chosen by the researcher. Doing some calculation myself enables me to practice a bit and can be the base for how I structure the piece of art in the end.

For this first collaboration, Portraits, n°1, the immersion was done at Laboratoire de Physique ENS de Lyon, and more particularly with Ludovic Bellon and his team.

It happened that early February was a very unique moment for creation as an anechoic Faraday cage was available, free of the optic table that was to be mounted in there a few weeks later for experiments.

A Faraday cage is a space that is fully isolated from all kinds of outer electromagnetic radiation, e.g. telephone or radio. Anechoic means that all walls are covered with foams that prevent sound from echoing. When someone talks to you in there, it sounds as though the floor were smothered with 50cm of fresh snow and you just hear the voice from the direction it originates, without any reflection.

During our collaboration, I had on several occasions the chance to isolate myself in the cage for artistic exploration of how it feels to remain there for an extended duration.

Ludovic’s team works on the scale of veeery tiny things – despite him saying that in some contexts it can be relatively huge. We’re talking nanometer, this means roughly the size of ten atoms, or 1 / 10 000 000 of your finger width. Nanometer is just the ‘entry’ scale, their goal is to somehow touch the surface of matter, scan it and build a map with as much precision as possible. So they’re going below that scale, with techniques involving the use of interferometry, i.e. the detection of tiny disturbances of laser beams trajectory.

There is a two step approach to reach nanometric precision in atomic surface mapping.
First, you take a small sharp probe (15µm long and with just a few atoms on the tip) and manually bring it close to the surface. With that you can reach micrometric vicinity at best. Then the trick is to embed the probe in a piezoelectric ceramic. Piezoeletricity is a property of a few solid materials which react to an electric tension by deforming slightly. By inputting more or less voltage, you get control over the probe position with nanometric precision. Bam!

Once you have that you can move your small probe over the surface and measure the force between the surface atoms and the probe tip. In the case of STM (Scanning Tunneling Microscopy), you do this by measuring how much current the probe exchanges with matter, i.e. how many electrons bridge the gap with quantum tunnel effect when the probe keeps the same altitude. As variations in current are very sensitive to vicinity of atoms, you can reach sub-nanometric precision, down to 10^(-13) m.

Note: STM is one of the many ways to measure the interaction between atoms, the more general term is AFM, for Atomic Force Microscopy.

The last tricky part is how to do this fast, because if you had to spend 1 second for each ångström (spatial step of 1/10th of nanometer) writing down the current value before translating the probe, it would take 2 months to scan only one atom line of the tip of your nail…
Now a good way to scan the surface fast enough is to shake the probe vertical position with a specific oscillating pattern that will provide measurement feedback in frequency for electric current, to reverse-analyze the atoms position.

Also, there is another challenge here: we are dealing with scales for which matter has some thermal excitation. Indeed, temperature is a measurement of how much particles naturally dance around and never stop. We call this Brownian motion, a form of erratic displacement pattern first described in the early 19th century.

Ludovic’s research revolves around the study of the natural vibration of inanimate probes due to temperature, when they are not even doing any matter probing!

The painting is drawn with particles born along the edges, then undergoing the force of pseudo-Brownian attractors. Strokes are lit based on their orientation, giving an overall feeling of roughness and 70’s comic book shading.

As the area is being painted, the colors get warmer. This can represent both human warmth – my or anyone’s journey in the cage – and the invisible thermal energy in the walls being transferred to the inside.

After 39 iterations, I captured the final piece. A copy was printed on aluminum surface and now decorates a corridor at ENS Lyon, M7 building floor 1. It lives together with physicists in their daily effort to push the boundaries of our understanding of the universe at all scales, and I like to believe the artwork is glad to witness that.

Ludovic pointed to me a certain number of readings that I could partially scout for insights or how things worked. I also asked him for some of his own publications.