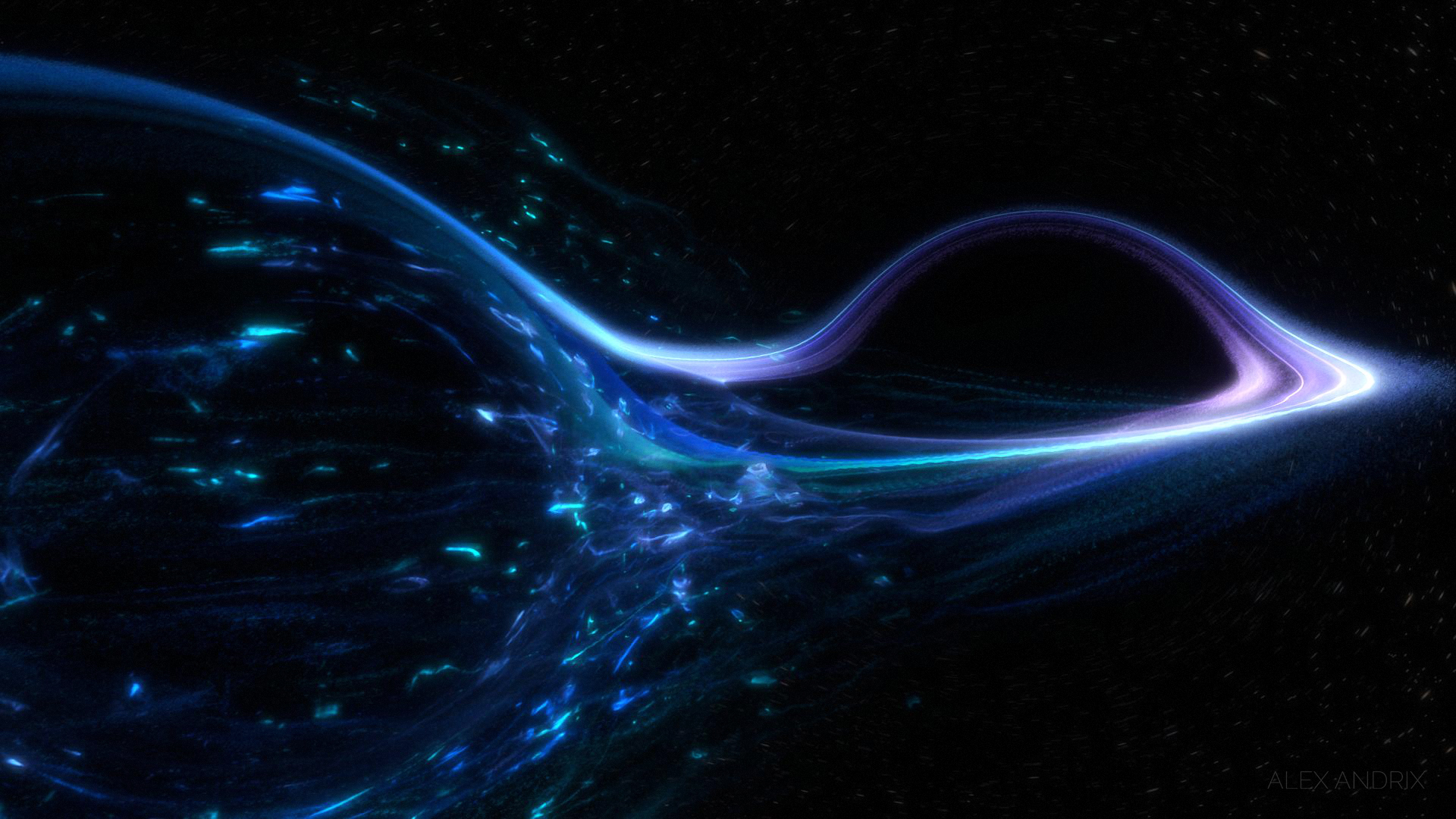 Although GW190814 Artistic Interpretation was widely spread around May 2020, I never really gave detailed explainations on how it was made. Here is an overview of the scientific elements, the parts of artistic interpretation as well as some technical insights.

Each identified gravitational wave event is given a name. GW190814 refers to an event reaching the Earth on August 14th, 2019: the merger of a 23-solar-mass black-hole and a lighter object. At the time of publication, it is unknown whether the second object is the lightest blackhole ever detected in a binary system or the heaviest neutron star.

You can find some detailed information about GW190814 as well as news and links on the Virgo website.

Jérôme Degallaix is a CNRS researcher at IP2I. A previous collaboration in 2019 led to the Variations Physiques vol. 2 virtual reality film, inspired by the formation of stars, gravitational waves and emergence.

Jérôme also works at the Virgo interferometer based in Pisa, Italy, hosted at the European Gravitational Observatory and run by the Virgo collaboration.

He wrote to me something like : « Hey, there is this cool unique event in the gravitational wave world, the discovery will have a public release and we’re looking for an artistic image. You can reuse former images, we’ll understand if you say no of course. »

That was the start of my voluntary work on the topic.

Starting on the move

At the time I was on a backpack & train trip from Paris to Dijon (France) on the reversed steps of scientist Henri Navier, made famous by the well-known Navier-Stokes equations in physics.

We are early March 2020, and it seems that I am being chased by the spread of a special virus coupled with an overall feeling of panic…

In Metz, Nancy, Thann, Mulhouse, Belfort, Besançon, Dijon, and then Lyon where I was locked down, I started spending hours on our work.

After looking at existing representations of black holes, I started reading a bit of science on the topic and meditating on the uniqueness of the GW190814 event.

How can we even see a black hole?

We don’t see a black hole like we see any object with our eyes, on Earth, as humans. Centuries of progress in astronomy enhanced our sense of vision, as a collaborative species spread accross the globe, with the help of ever-improving equipment.

Although gravitational waves are a most recent way to see via tiny spacetime distortions and huge detectors, there exists a network of radio telescopes that do watch the sky almost the way we animals do: probing electromagnetic waves within a given wavelength range. The following image was algorithmically generated out of several observations by the EHT telescope array in 2019 with data from 2017.

While dense gas clouds around black holes do emit light, it is also interesting to imagine just how the intense gravity around the black hole warps matter of all sorts.

Second, a recent animation showing how photons get bent around a black hole to finally reach our sensors on Earth and render a flat image.

Also, looking at films such as Interstellar and reading about the research process and interaction bewteen the physicist and the filmmaker was questionning – one of many articles here: https://www.newscientist.com/[…]. I feel like it is most often a matter of finding a compromise between scientific accuracy and the need for the most stunning visual impact you can get.

After gathering some insights, I opened my favourite 3D creation software. The first immediate solution I came up with was to use Unity VFX Graph particle systems for special effects and display 2 rings in the scene around the black hole, one on a horizontal plane, the other facing the camera. This way, we would see the lensed part of the ring; what should be behind is distorted and visible on top. The overall look was full of glittering matter particles all around.

Although a certain number of scientific key points were already taken into consideration (gravitational pull, possible rotation of surrounding matter, growing Schwarzschild radius black sphere), the visual coherence of putting together matter particles and a swallowing massive element was quite hard to achieve.

The growing black spheroid doesn’t look so good and the bursts blind the viewer a bit during the merge. Also the focus is on the unidentified object – possibly a neutron star – and the blackhole bumps into it without much of a warning, just like a bowling ball.

A few more steps led to the iteration shown below. Despite the fact that the velocities at stake might not be comparable to the cosmic expansion, you can see for instance how redshift is highlighted: particles going away from the camera are redder than those getting closer to the camera.
Also, a camera travelling was added and the mysterious object has more features: the heart of a black hole and tiny shiny neutron star matter mountains (although the surface of a neutron star is in reality thought to be extremely flat).

The approach phase was not sufficiently visible on both video steps shown above. Also I was not fully satisfied with the double-ring trick for lensing (best visible at 00:29 on the second video)…

Then I spent hours looking at technical tutorials on how to mimick a black hole effect with shaders in a 3D software. I tried to implement the existing solutions but didn’t fully manage. Above all, the end result worked on the final image layer, with only one distortion effect (called lensing) that couldn’t be shifted away from the center of the screen.

A growing frustration turned into some intense thinking.

At last I had a hint: an immense force field in the shape of a tube that would push away all particles behind the black hole, so the background remains dark. Then giving more thinking into it, the force field became a visual distortion field, and I worked on some math functions to achieve lensing effect around the black hole.

It’s a fairly simple trick: just imagine a cone that pushes away all visual elements. Starting from the eye of the viewer, aiming at the massive object. All elements in the video are particles. The mysterious object is made of 1 000 000 tiny dots and there are up to 100 000 dot-stars spawning here and there. We are simply adding some extra displacement vector to where each matter or background particle should be located.

Here below is a video shot from a different camera angle to better picture what the displacement does to all elements in the scene (colors and forces are not exactly like in GW190814 Artistic Interpretation).

Our setup has 2 different cones (one lensing effect for each of the massive objects), with some special treat to particles in front of the objects, which should not be displaced. Also, stars are azimuthally stretched around the objects.

The end result is a flexible displacement function in the (x, y, z) space, which you can apply to any set of particles within this VFX Graph tool.

The code behind the black hole effect

The whole animation was made within the Unity 3D environment.

I used to code with C#, and seldom with a shader laguage such as GLSL.
When VFX Graph came out, all I had to do is transfer the mental math mechanics of my plain code into this new visual way of chaining operations.

The underlying math are fairly simple, involve Gaussian functions, power laws and cross products. About a million particles dance around, controlled by a tailor-made set of equations.

Scientific elements visible in the video

With an extra artistic thought: 4 matter streams evoke the 4 strings of a violin or a cello.

I was very lucky I could stay at a couple of friends’ appartment during the first Covid lockdown in France. There was a keyboard.

The soundcrack chords can be heared in a song by Charles Aznavour: Trousse Chemise.

If you listen carefully to the notes during the approach phase on GW190814 Artistic Interpretation, you will notice that only a few keys are pressed, on the same chord. As the wave expands, more and more notes are played, starting at the center and radiating away to the low and high pitched notes until the climax in intensity. The keyboard acts as a one-dimensional space in which musical waves are emitted from the center to the edges.

Sending the video to Jérôme, it then reached the Virgo outreach team and we had online meetings. Also with the LIGO outreach team.

We were talking about scientific accuracy. Overall it was a question of preserving the quality of the animation while not inducing public misunderstanding. We had debates on the introductory texts and the naming of the unidentified creature. I thought it was fun to propose Neutron Hole, but according to the team the press may have gotten crazy about a seemingly newfound object, while it was probably nothing of a new nature. We ended up with Unidentified massive compact object.
The BBC took care of the extra creativity:

Most importantly, discussion with LIGO/Virgo collaborators (global collaboration) led to a disambiguation text at the very end of the video: The streams and lensing around the compact objects are an artistic invention. GW190814 is thought to have been electromagnetically dark, unlensed, and free of ejected matter.

The video was shared by Virgo along with its press release. It features in the dedicated GW190814 news article: https://www.virgo-gw.eu/GW190814

Very soon after the public release I received emails and phonecalls from press. It was mostly for permission to use image and video content. One or two interviews for local press too (Lyon).

I think all the feedback I had was positive and encouraging.
Although some did, I was also surprised that some well-known publishers just didn’t ask for permission to use content.

For instance the New York Times just took a screenshot of the video and used it as it was for an article that would remain at the front page for a little while, although a high-definition image pack for Press was made available on demand. Some other news providers chose to capture a specific frame of the video.

Some publishers did ask for permission. SKA magazine features the official still 4K image on the front cover. Matt O’Dowd from PBS Spacetime also uses video extracts in his presentation, embedded below.

Here are some links where I found some GW190814 Artistic Interpretation content:

In October 2021 I had the chance to visit the Virgo detector and discuss with researchers and technicians in the control room – quite impressive hotspot – as well as with the Outreach team on ideas for possible future collaborations.