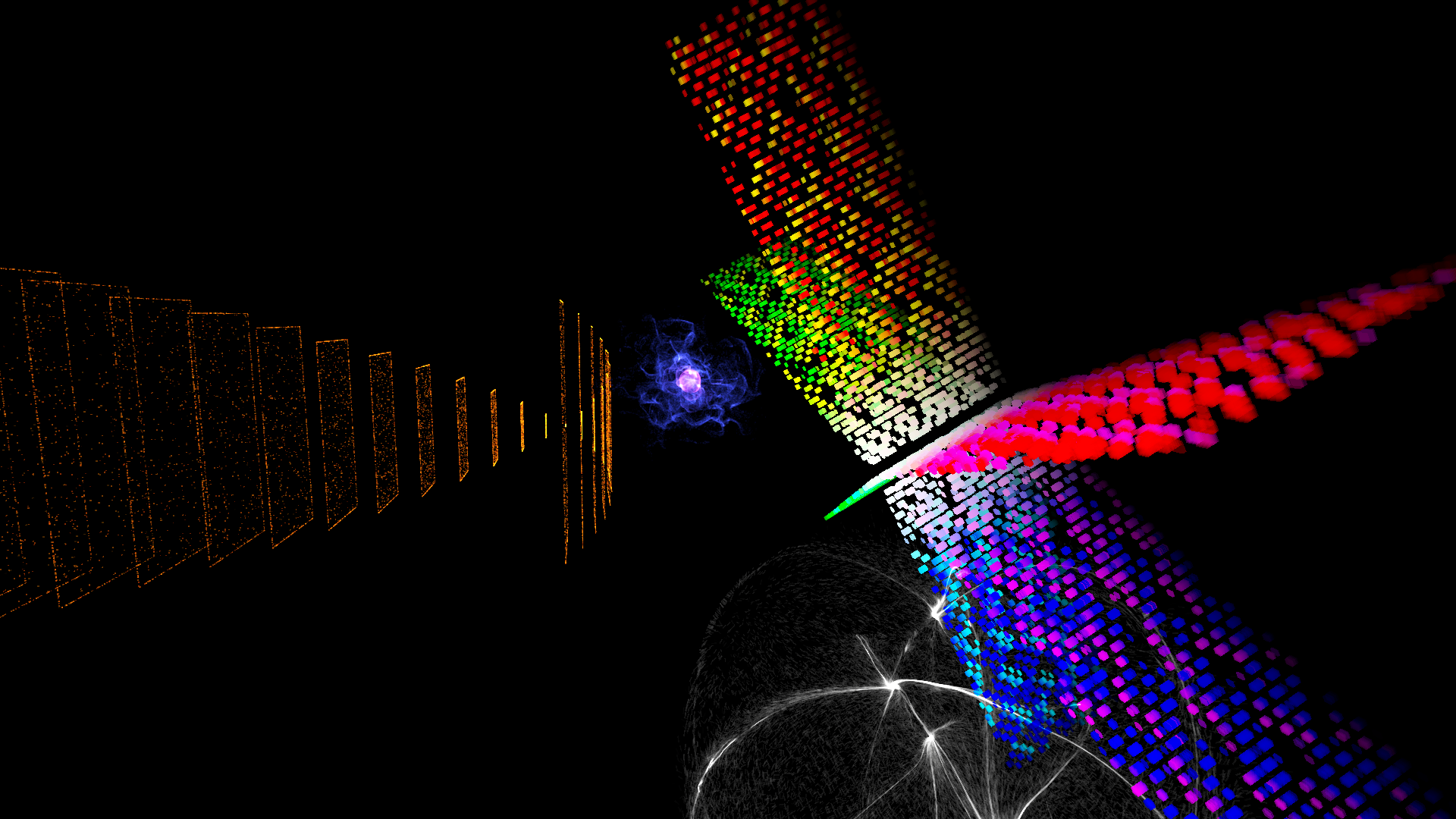 My role there was specific: creating a whole new virtual world inspired by the essence of GRETSI.

We can picture the initiative as a sort of happening. Set up on an amphitheater stage with a laptop and a VR headset, I would start building an empty world. Throughout the creation process, the screen would be mirrored on a wide projection screen behind me, so people could witness the making of the world. The VR headset was plugged in, so anyone could be immersed right inside the world I was creating live around them.

Occasionally, I would stop working on it and welcome any discussions, about my presence, GRETSI overall, and particularly about what the person in front of me was working on as a researcher or engineer.

At times, an explanation or a specific thought on a topic would spark an idea that I could explore further to create a virtual object.

Using particles and force field equations in three dimensions to depict bits of an imaginary world, 4 objects were born.

As all objects except the last one, this object is inspired by a discussion with a researcher. I came to realize that in our brain, some neurons have a much more important role than others. Those major neurons can either inhibit or enhance information transmission.

3 of these major neurons are represented at the center of the object. Particles spawn on the surface of concentric spheres with oscillating radii. We can think of it as either the propagation of information, or its destruction. The chosen colors and turbulent shape can be thought of as a metaphor of the brain.

On a technical level, 3 spring attractors drag particles closer to neurons. The surrounding turbulence is a 3D Perlin noise. Some viscosity is added to calm things down a bit.

This pattern is inspired by the concept of steganography. Steganography is a set of techniques used to conceal information within another source of information, such as sound or image. It instantly reminded me of the anamorphosis techniques: when the image you form of an object strongly depends on the point of view.

So it started with an idea of building a particle cloud, that from a precise view location looked triangular and from aside looked square-shaped. Deriving from this initial idea, I laid a series of vertical squares with increasing size, thus forming a square cone that just looked like a single square from the right angle. Shifting to a different size pattern and then stretching the planes vertically, the final object can be viewed as a door to a new dimension of hidden information.

Note: Unexpectedly, PhD student Veïs Oudjail and then several other signal processing researchers pointed out that the object fitted well with the representation of the encoding and decoding in artificial neural networks.

A researcher made me realize that a 1 Mpx image can be viewed as a 1-million-dimensional vector space. This was the origin of a new goal: representing a flat grid of squares, with 3 or 4 vectors originating from each square (RGB or RGBA).

For some reason, I ended up depicting the HSL color space instead. HSL (or HSV) is a cylindrical color space, with Saturation and Lightness as 2 linear dimensions and Hue as the color angle. Slices of the HSV space are depicted, with their gradients in saturation and lightness, as well as garish edge-less cubes. The rawness of the colors is a tribute to the RGB color space from the HSL color space, because RGB has been the way color is encoded in our hardware since more than half a century, while HSL is ‘merely’ a very handy layer on top of RGB.

From certain angles, cubes look like flat hexagons, creating a confusion on the nature of color information.

Particles don’t have a motion, but spawn and die very quickly. This, together with the fact that their position depends on their instantiation index that rotates over time, contributes to a glitchee old-fashioned vision of information technology.

The final object in the GRETSI VR scene is a sort of sphere that changes shape depending on your distance from it. It was born from looking at the GRETSI logo: almost 3 perfect circle arcs. What if you expand those arcs into circles, positioned on the vertices of a triangle? What if you add a third dimension, and position spheres on the vertices of a regular tetrahedron?

With some gentle turbulence and special force fields that conform the particle clouds into spheres of varying radii, what we see is the intersection of those spheres. Playing with the tetrahedron size creates different patterns. From afar, you can notice the shape of the GRETSI logo.

From closer, it slowly transforms into something rounder.

When you reach the inside of it, it becomes perfectly spherical: you entered the world of GRETSI.

& all GRETSI folks who shared the experience